Update 4-6-’17: The Opening was a success! Thanks to all visitors & participants, especially those who took something home!

Meet International Photographer Joan Lea Miller at her One Woman show: “Vanishing Tribes and Culture in Ethiopia’s Omo Valley”, Friday , March 31, 5:30-7:00 pm. Opening night party with complimentary wine and treats. She will also be giving a slide presentation (details to be announced). Joan’s photography will be on display at the gallery through April 29.

Vanishing tribes and Culture in Ethiopia’s Omo Valley
Photos of an exotic forgotten tribe from Africa. Meet and hear first hand about this exotic experience with these fantastic creative natives fully adorned with face and body paint and the most interesting examples of local flora and fauna. Catch a glimpse of these vanishing tribes people before their heritage is lost forever.

Photographer Joan Lea Miller:
Joan Lea Miller was born in Los Angles, California but has lived most of her life in Miami, Florida. She attended the University of Miami where she graduated with a Bachelors of Science Degree. Later she went on to earn a Bachelors degree in Fine Arts from the Florida International University and a Masters degree of Fine Art from the San Francisco Art Institute.

Her journeys have taken her crisscrossing the globe in search of compelling travel experiences and exotic photographic images. Through out her life she’s found inspiration in traveling to really remote, difficult and risky countries such as Ethiopia, Papua New Guinea, Northern India, Myanmar, Vietnam and Indonesia’s Ring of Fire.

Her goal in traveling is getting a solid feel for the day to day life of the ordinary people who make up the country. Culture is the key to experience that solid feel for a peoples daily life. Culture focuses not on isolated individuals and whatever personal characteristics they may possess, but on societies and the beliefs and ways of behaving that its members hold in common.

Every culture has its own customs and ways. Regardless of their approach to life, however, Miller has found that people in other cultures are not all that different from us. We all share the same basic wants, needs and desires.
Suri Culture: The Suri are among the 12 tribes in the south of Ethiopia where they live in remote mountain regions. Tensions surround all the tribes resulting in violent battles. They have a fierce culture, with a liking for stick fighting called Donga or Saginay, bringing great prestige to men. It is especially important when seeking a bride. They are very competitive and risk serious injury and occasional death. The males are often shaved bald and frequently wear little or no clothes during the stick fights. Bodies will be painted, some will wear limited protected gear.

Piercing and lip plates are a strong part of the Suri culture. At the point of puberty in order to beautify themselves for marriage, most women beautify themselves. They have their bottom teeth removed in order to get their lower lip pierced then stretched so as to allow for plates up to sixteen inches in diameter. Having a lip plate is a sign of beauty and the bigger the plate, the more cattle the woman is worth. This is important when the women are ready to get married.

The Suri pride themselves on their scars and how many they carry. Women perform scarification by slicing their skin with a razor blade after lifting it with a thorn. Men scar their bodies after they kill someone from an enemy tribe. These rituals are extremely painful.

Villages normally range in size from 40 to 1,000 people. Village life is communal, sharing the produce of the cattle (milk & blood).

Though their chiefs may wear the fur crown of a pagan priest king, they are merely the most respected elder in a village. Literacy level is very low.

Each household in the Suri village is run by a woman. These women also own their own fields and are allowed to use their profits however they wish. Every age group has a certain role. Young men who are not yet considered warriors help with cattle when they reach age eight.

We will go outside to gather information through sketches, photos and small paintings. I will focus on how to simplify all of the information into masses, values and composition. We will be working on small panels or paper to keep our shapes and values simple. I will do a demo each day and then provide individual attention to each student at their easels. In case of rain, we will use our photos and sketches to develop paintings inside. Bring several (2-3 per day) smaller canvases or boards to paint on no larger than 11×14. Pastellists need to bring several pre cut surfaces to use for the studies. Critique for each students workshop pieces is available if requested. Class will begin at 9:00 each morning and will go to 4:00 in the afternoon with an hour for lunch.
One man show: Friday 5:30-7:00 pm. Wine reception open house.
Weekend Warrior Workshop, Landscape Painting, at WOW (Workshops On the Waterfront), 117 Market Street, Apalachicola, FL.
$350 includes all activities.
To sign up, send an email to lynnwilson2@aol.com

About Debra Nadelhoffer:
Georgia plein air and studio artist of oils and pastels. Signature Member of ASMA, a member of American Impressionist Society, Oil Painters of America, American Women Artists, a master signature member of Women Painters of the Southeast, and a signature member of Southeastern Pastel Society. Deb has mastered landscapes and wildlife and has been a popular artist of the Forgotten Coast scenes and On the Waterfront Gallery for years.

Debra Nadelhoffer Workshop Oils and Pastels: February 3-5, 2017
We will go outside to gather information through sketches, photos and small paintings.  I will focus on how to simplify all of the information into masses, values and composition.  We will be working on small panels or paper to keep our shapes and values simple.  I will do a demo each day and then provide individual attention to each student at their easels.  In case of rain, we will use our photos and sketches to develop paintings inside.  Bring several (2-3 per day) smaller canvases or boards to paint on no larger than 11×14. Pastellists need to bring several pre cut surfaces to use for the studies.  Critique for each students workshop pieces is available if requested.  Class will begin at 9:00 each morning and will go to 4:00 in the afternoon with an hour for lunch.
One man show: Friday 5:30-7:00 pm. Wine reception open house.
Weekend Warrior Workshop at WOW (Workshops On the Waterfront), 117 Market Street, Apalachicola, FL.
$350 includes all activities.

Joseph Palmerio, , has been Postponed to Fall, 2017. Dates to be announced.
Workshop utilizing two color palette, emphasizing warm and cool relationships. We will also cover complementary color palette, making use of and understanding the secondary colors of the palette, simplifying the landscape using limited palettes, and understanding the sky and how it relates to the entire landscape.
One man show: Friday 5:30-7:00 pm. Wine reception open house.
Weekend Warrior Workshop at WOW (Workshops On the Waterfront), 117 Market Street, Apalachicola, FL.
$350 includes all activities.

…more details to be announced.

“I love exploring the landscapes of Florida. It gives me a sense of place and home. I am especially intrigued with the wild places such as the St. Marks Wildlife Refuge. Outdoor painting demands both acute observation and my full attention. Although the product is a still image, the process feels more like an exquisite slow movie, I strive for a sense of oneness and congruency with the landscape.”

Come celebrate our First Anniversary at “On the Waterfront Gallery” Friday, October 16, from 5:30 to 7 pm, with music, wine and delicious treats. View our spectacular collection and meet and greet our artists and friends. See the event at Facebook: https://www.facebook.com/events/1171660046196831/
117 Market Street, Apalachicola, FL

The workshop was a success! Thanks to all artists who participated.

“From Marshes to Coastal Skies”

Come join other artists in this 2-Day Oil Painting Workshop. Together learn exciting principles taught by Keith Martin Johns, MFA as he leads students to strengthen their skills and practice professional techniques to create beautiful oil paintings of Florida’s marshes and spacious skies.

Congrats to Debra Nadelhoffer, our Artist of the Month, July 2015. See her page. 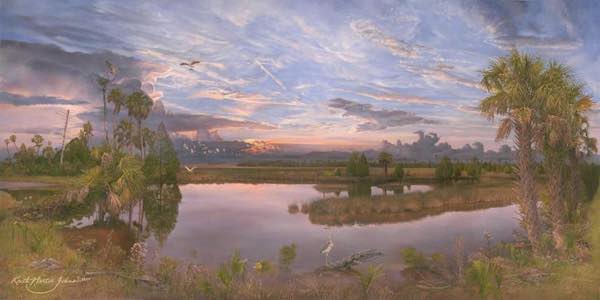 Learn the techniques of Landscape painting from a master Keith Michael Johns coming to Apalachicola Thursday, Friday, & Saturday, Feb 5,6 & 7 at “On the Waterfront Gallery” 117 Market St., downtown. He will demonstrate and guide you through his techniques and secrets for $98 per day or $295 for 3 days. Don’t worry if you don’t have brushes or supplies because he will bring everything. You need only yourself to enjoy and learn from a master. Call 305-588-5885 or 850-653-9699 to register. See you soon! – Lynn Wilson, with AAA.

A professional artist for over 35 years and classically trained, Keith Martin Johns is presenting a unique workshop teaching the principles of the Old Masters. He will be an ongoing instructor working with Lynn Wilson at, On the Waterfront Gallery in Apalachicola, FL.

Day 0ne: Introduction to fundamental basic vocabulary and color harmony by creating two color wheels and a value scale. Review perspective, movement and balance, grid system, sight readings and negative and positive space. In the afternoon, thumbnail value study in the field. Be prepared to bring your easel and necessities for outdoor sketching on a 18″ x 24″ sketch pad, bring digital a camera and USB cord for downloading.

To compose art is to see it, feel it and think it. We will do all the necessary study including plein air, sketches and photo reference. Combining imagination to fuel all the inspiration we gather to imitate reality. Keith calls this, “Creative Representation Realism. It’s part real in that it is based upon what we can see and know; that’s the objective nature of art. It’s real in the subjective sense because the stimulus for the art has been processed through the soul. It is no mere picture or exact representation of reality but the reality within and without; that makes it a work of art”.

The “Art of the Oyster” Fundraiser, “Paint Party”, Exhibit and Auction

On Thursday, January 8, 6 PM, please join us for a painting party at the Center for History, Culture and Art, 86 Water Street, Apalachicola, Florida. RSVP.

Calling up to 25 creative painters to participate in a painting party with an oyster theme, to celebrate The Apalachicola Volunteer Fire Department Cook-off and Fundraiser. Artists of the Artist of Apalachicola Area (AAA) will be on hand to provide “expert” advice.

16 x 20 Gallery-ready canvases and paints will be supplied along with wine and appetizers.  Your completed Oyster Art painting will be on exhibit starting Friday, January 9 and be featured auction items for preview Friday night, January 16 with the auction continuing throughout the day on Saturday.

The Annual Oyster Cook-Off to benefit the Apalachicola to Fire Department is held every year on the Friday and Saturday before Martin Luther King, Jr. Day at Riverfront Park.  All proceeds go directly towards paying for the brand new fire truck they were able to purchase a few years ago, due to this sole fundraising event. We believe the AAA creations for auction will not only be a wonderful exhibit but will add a new dimension to the fundraising opportunities.
This year’s 5th Annual Oyster Cook-Off will be held January 16th and 17th.

Lynn has been selected in to the prestigious Southern Appalachian Artist Guild (SAAG) National Juried Show with her oil painting “Rose’n’Shine”, judged by noted artist Lori Putnam. Amongst Lori’s many honors are OPA, Salmagundi Club, and the American Impressionist Society. This painting was created during the Annual Rose Festival plein-air paint-out last fall 2013 in Thomasville, Georgia. Of the 380 entries, only 130 pieces reached the finals. Opening Reception is October 25 2014 at The Art Center for the Southern Appalachian Artist Guild and the Blue Ridge Mountains Artists Association, Georgia.